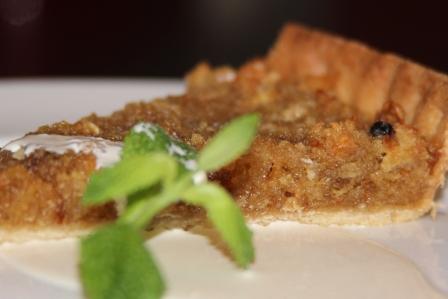 For my first blog as the anarchic kitchen I felt I should start with my favourite pudding – treacle tart. It is a two stage process, but once you have mastered the basics of pastry, with the cling film trick to make it easier, then this is a really quick and impressive pudding. Anyone with a sweet tooth will struggle not to be impressed. This is also not a set recipe, you can mess about with the filling. You can make it rustic by coarsely chopping the bread, add cinnamon or other spices, orange zest, lots of black treacle to add a bitter sweet flavour. This is how cooking should be – flexible, inspirational and imaginative – play with the ingredients and the flavours and taste your results. You will need a 20cm flan or tart dish for this. And like all the recipes, this should be achievable without scales, just a keen eye and tasting along the way. The purspose of the blog is not to learn to follow my recipes like a scientific experiment, but to learn the skills to be able to experiement with your ingredients and flavours. 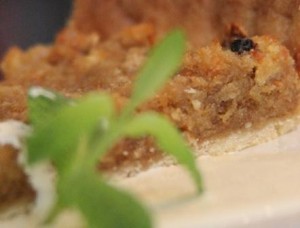 Put all the ingredients in a food processor, make sure it is all mixing, then when it comes together stop. Put it on a board and just kneed it until it comes together. Cut in half, wrap each half in cling film. Fridge one for at least an hour, freeze the other for another time.

Take the pastry out of the fridge, get some baking parchment and put it in the pastry and fill with baking beans. Bake it in the oven for 10 minutes (until the sides are beginning to colour light brown). Then take out the beans and bake for another 10 minutes until it is crisp. Then get an egg yolk and a dash of milk, mix together and paint onto the pastry. Bake for 2 minutes to seal the pastry.

6 slices of white bread (the staler the better). Take off the crusts, put in a food processor and blend until fairly small even breadcrumbs. Roast the crumbs in the oven for 10 minutes (golden toasty bits  add flavour. If using oats, roast them in the oven for 10 minutes. Then mix all the ingredients together in a mixing bowl. Pour into the pastry. Bake in the oven for 15-20 minutes, until it feels just the wrong side of set (still a little bit liquid in the middle). Take it out of the oven.

Let it cool completely this sets it.

A Christmas version can has half a jar of mincemeat added to the mixture.

Lime and a pinch of nutmeg work well